When England plays Brazil in the Maracana on 2 June it will be nearly 29 years to the day since their last game in the old stadium. That game in 1984, a routine end of season friendly will always be remembered for John Barnes ‘Brazilian’ goal, when he slalomed through the Brazilian defence to score an incredible solo goal.

But how, at a distance of nearly 30 years can one instantly identify this goal was scored at the Maracana rather than Wembley? Or, given the Selecao’s Harlem Globetrotters-style schedule, at the Maracana and not New York or Doha?

The answer is simple. The goal nets.

Until recently each region of the football world employed different methods of suspending the goal nets. In England and the Low Countries, full support stanchions or “A-frames” were favoured. In Central Europe triangular “elbows” or “Continental D” supports were preferred. South America and Brazil’s on-field architecture of choice was the “L-supports” seen at the 1950 World Cup final in the Maracana, in the Argentina1978 World Cup finals and at the Maracana in 1984 when John Barnes scored.

At club level too, each ground could be individually identified by it’s goal nets. Chelsea had a crook in the base of their stanchions, as did Barcelona whose goals were easily identifiable from the curvy stanchions at the Bernabeu (the particular on-field architecture of which Heart of Midlothian copied and made their own in Scotland).

In this period, right up to the 1980’s, clubs were brands and they celebrated their individuality and highlighted their differences from other clubs, as brands do. However clubs are no longer brands. Instead, the competitions the clubs play in are the brands. So be it the Champions League or Premier League, the game’s organisers sell a collective product with a homogenous design of on-field architecture – the free-hanging box net.

Though the box net has been around for over 100 years, it came to global prominence at the 1974 World Cup finals, the first tournament where a uniform method of suspending the goal nets was employed across all stadia. In England, Europa 96 and UEFA’s insistence on uniform box nets spelt the end for individual goals at the domestic club level.

Box nets are now everywhere, including at the Maracana. On 2 June Wayne Rooney could dribble past five Brazilian defenders and round the goalkeeper to score and, watching on TV you wouldn’t know if he’d scored in Brazil or in Blackburn. Goal nets everywhere look the same.

Check out the message boards; fans everywhere mourn the loss of the different methods for suspending the goal nets and their clubs and national sides’ subsequent loss of individual identity.

Next year’s World Cup finals in Brazil offers the opportunity to restore individual identity in the game.

In the 1920’s South American football began to differentiate itself from its Anglo-Saxon equivalent by promoting the individual over collective values and musical metaphors were employed to describe playmakers as conductors and wingers as soloists.  Football was recognised as art. This reached its apogee in the 1970 World Cup final, where Brazil’s virtuoso individuality and agility swept aside the organisation, physical force and collective endeavour of Italy.  “You cannot be the best in the world at a game without loving it,” Hugh McIvanney wrote in rapture at the final. No team has ever loved the game more, before or since and the Selecao became synonymous with individuality in football.

The goal nets at international tournaments have long influenced the club scene after the event. Hence you’ll see Manchester United free-hanging their nets Spanish-style in front of their existing stanchions after the 1982 World Cup, and Manchester City installing the Continental D’s of Belgrade after Panenka and the European Championships of 1976.

Thus, should FIFA install Brazilian-style L-supports to suspend the goal nets at next year’s Brazilian World Cup finals, it will not only delight fans the world over but be a huge signal to the game’s national associations and competition organisers that there is still space for individuality in this era of collectivism and homogeneity.

Sign our petition at change.org and demand that FIFA World Cup 2014 respects the traditions of the South American football region in general and Brazil in particular, and promote regional and national identity in the game by adopting the L-supports method of goal net suspension at each of the stadia at the World Cup finals in Brazil.

Posted by Tony Caramella at 4:54 AM No comments:

Estadio Governador Magalhaes Pinto - or Mineirao, as it's more commonly known  - is a stadium in Belo Horizonte. It will host 6 matches during World Cup 2014.

Recently the Selecao played Chile at this stadium. The match, a 2-2 draw, was played out between a pair of colourful, if identity-free, box-nets.


Let's be clear what identity-free goal nets in Brazil means. Brazil are the most recognised football team in World football yet, given the goal nets, you can't identify even which continent the Selecao are playing on.

Are they playing in London UK?


It's impossible to tell.

However, the last time Brazil played in Belo Horizonte there could be no mistaking they were playing at home, in Brazil. How can you tell? Look at the goal nets!

Posted by Tony Caramella at 8:30 PM No comments:

Goal Nets and the Laws of the Game

FIFA's Laws of the Game runs to some 142 pages.

Of those 142 pages, only 26 words are are allocated to goal nets.

Nets may be attached to the goals and the ground behind the goal, provided that they are properly supported and do not interfere with the goalkeeper.

That the nets have to be "properly supported" has seen the evolution of the various support systems.

That the nets must not "interfere with the goalkeeper" shouldn't exclude any club or stadium manager installing the support system of their choice.

So why does nearly every stadium in first class football have box nets? Because FIFA have deemed any other support system unsafe.

In their Stadium Book, under 'Dangers and Obstructions' FIFA adds 31 words more to the rules on goal nets. 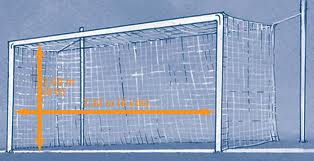 Posted by Tony Caramella at 3:56 AM No comments:

Luis Suarez' second free kick against Zenit St Petersburg has rightly been singled out as a classic of it's kind.

But for all the brilliant Brazilian bendiness, what about the hockey-style rebound off the nets? On reflection, doesn't the goal look like kicking a ball against a wall in  training?

How much better might this goal have looked if the nets weren't made of trampoline, weren't yanked back to full tautness and there was no ground support spoiling the aesthetics?

What if the net actually retained the ball?

Everyone watching can pause in the moment to reflect that they've just witnessed - and while the ball remains motionless in the net they are still witnessing - a great goal.

Posted by Tony Caramella at 8:02 PM No comments:

What was most interesting for us Brazilian goal nets fanatics were the classic L-supports at either end of the Estádio Centenário.

Check out the two goals in the game - and the fabulous nets - below.


Posted by Tony Caramella at 4:06 AM No comments:

A crash course in the different methods for goal net suspension, through time and round the world.

Full support stanchion or A-frame as pictured at Wembley. No mistaking those stanchions.

Continental D supports, popular in Central Europe in the 70's and 80's.

South American L-supports, as pictured at FIFA World Cup 1978 in Argentina. Native to South America, they're as Brazilian as Pele and yellow shirts and blue shorts. 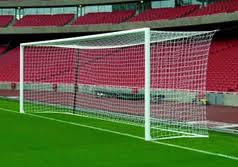 Homogeneous free-hanging box goal nets as pictured at Wembley, but how can you really tell? If we don't campaign, these will be installed at each of the 12 stadia at the 2014 World Cup finals and you won't know if you're watching a game in Brazil or in London.


Posted by Tony Caramella at 6:23 AM No comments:

Historically, the different regions of the football world employed different methods of suspending the goal nets. In England and the Low Countries, full-support stanchions or “A-frames” were favoured. In Central Europe, triangular “elbows” or “Continental D” supports were preferred. In South America, “L-supports” were the method of choice.

In recent years, however, there has been a worldwide movement towards a uniform method of goal net suspension, the free-hanging box goal net as first seen on the global football stage at FIFA World Cup 1974 in West Germany.

While modern, and safe for players, we believe the global adoption of this method of suspension has led to a loss of local and national identity.

The respected football author Jonathan Wilson has written that, “If you’d shown me a photo of a net in the mid Eighties, I could have told you the ground,” but regrets that, “Globalisation has led to homogeneity,” and “Now… if you showed me a photo of a net it could be anywhere.”

The method of suspending the goal nets with “L-supports” – as seen at the 1950 World Cup final at Estadio do Maracana in Rio de Janeiro and at FIFA World Cup 1978 in Argentina – are local to South America and are as Brazilian as Pele, yellow shirts and blue shorts.


Please sign the petition and demand FIFA World Cup 2014 respects the traditions of the South American football region in general and Brazil in particular, and promotes the regional and national identity by installing the “L-supports” method of goal net suspension at each of the stadia at the World Cup finals in Brazil.

Thank you.
Posted by Tony Caramella at 5:45 AM No comments: